The Affordable Alternative to Boat Ownership™

Sailors will tell you there’s something alluring about the sea. It calls to the soul like whisperings in the night, and the pull is irresistible. But just how did boats begin?

Freedom Boat Club in Buford exists to share the beauty of the water with others. As Lake Lanier’s oldest and largest private membership boat club, we allow boat sharing, which is where you merely show up at Lake Lanier, come down to our boat dock, pick out your boat, and enjoy your day boating, tubing, water skiing, or just relaxing on the Lake. In this blog post, we’ll explore the beginning of boats in brief. Contact us today!

THE BEGINNING OF BOATS

Ever since humans have existed, we’ve tried to cross bodies of water. It’s like squirrels who dart across streets at their own peril to get to the other tree; humans have been curious to see what’s on the other side as well. The first known civilization with boats was ancient Egypt. Reeds were used as sails to cross the Nile and to go fishing in the delta around 4000 BC. These boats were found buried with their presumed owners for use in the afterlife. To cross the harsher seas, wood began to be used by the ancient Egyptians in 2500 BC.

One thousand years later, the great sea-faring people known as the Phoenicians who lived in modern-day Lebanon built a galley boat, which was powered by oars and capable of fighting at sea, ushering in sea-warfare.

In 1000 AD, the Vikings had need of a ship that could travel up rivers. Enter their signature longboats — big but narrow for going up and down rivers. One hundred years later, the Chinese, in need of fighting vessels, invented the junk, which was a boat with a rudder for steering, watertight compartments, and battens on their sails to make them stronger. The famous exploration ships all had masts, which didn’t become popular in ships until around 1450. Charles II of England was the first to use a yacht to carry him from place to place in 1660. This is how yachts came to be associated with carrying rich, important people.

The clipper ships, light and fast, appeared in the 1800s with tall masts and slim hulls, borrowing from the Vikings. Steamships crossed the Atlantic Ocean beginning in 1819 with passenger service beginning around that time as well. Ocean liners came about in the middle of the nineteenth century, using propellers instead of sails. River boats with paddle steamers for transport appeared in 1880. Steamships began to be replaced by diesel power in the beginning of the twentieth century. Hovercrafts came along in 1955, using air to propel and lift the boat forward. Container ships were improved in 1980. 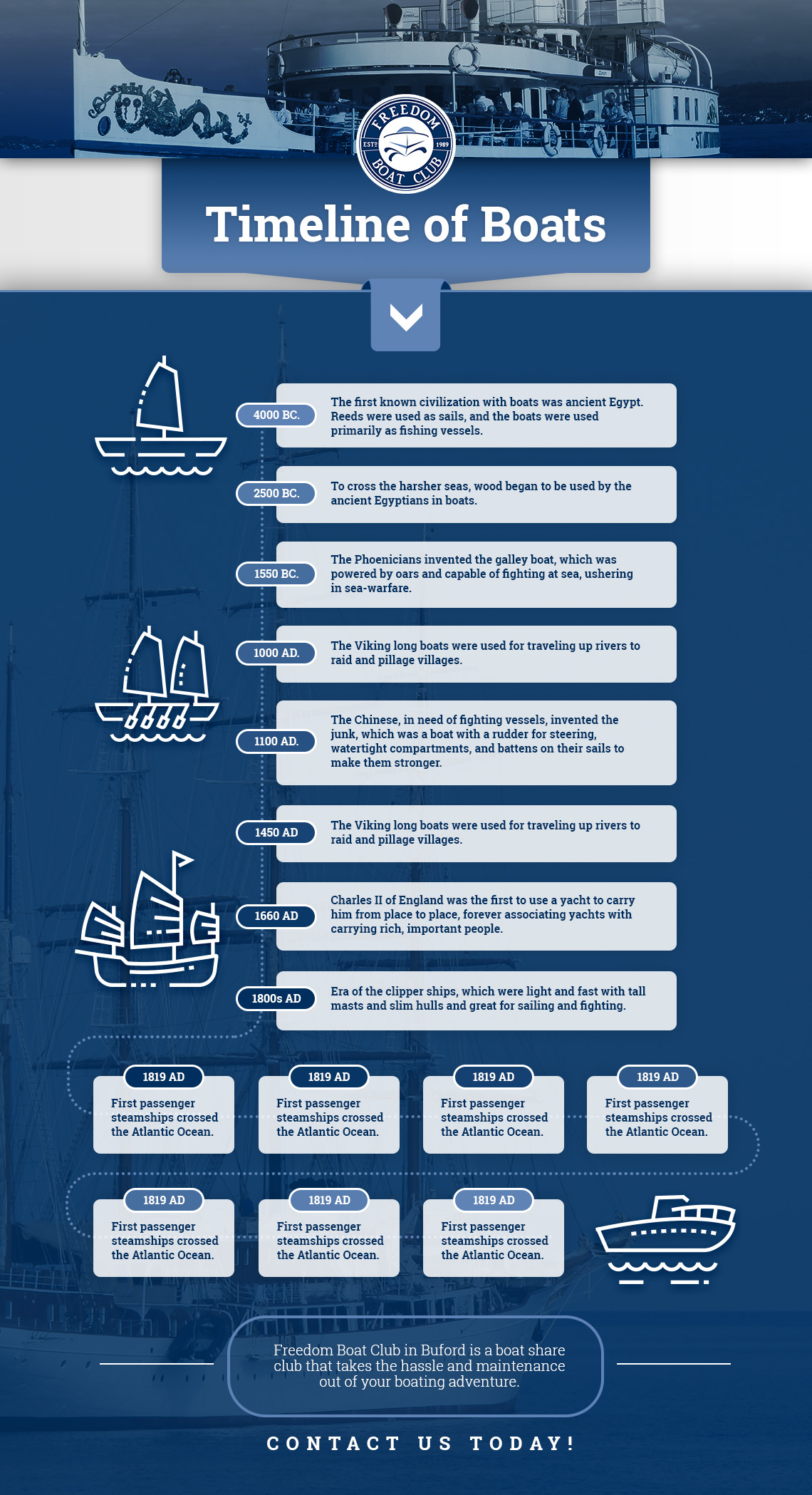 Boats on the seas today are almost as ubiquitous as cars on the highways. From cargo boats, recreational boats, cruise ships, oil tankers, sail boats, and more, the variety itself will remind you just how far we’ve come as a society.

Freedom Boat Club in Buford is passionate about bringing boating to everyone. Once a member of our boat club, you’ll have access to any and all of our boats, hassle-free. We handle the maintenance and care of the boat, while you handle all the fun. We understand that owning a boat is a big investment, which precludes many from partaking of this wonderful pastime. Freedom Boat Club in Buford exist to change all that. Contact us today for membership details!