The Affordable Alternative to Boat Ownership™

THE BEGINNING OF RECREATIONAL BOATING

Boats were first designed and used to make humans’ lives easier. As our lives became easier, we had more time for leisure activities, such as boating. However, in the Middle Ages, only royalty and nobility had the time and money for such pleasures. Enter our friend King Charles II of England, whom we met in our last blog post. He is recognized by many as the world’s first yachtsman, sailing on the Thames. It’s believed he built 20 yachts throughout his lifetime.

The 1700s saw the formation of the first sailing club, a giant step forward in recreational boating. However, boating was still only for the elite members of society. The United States didn’t see its first boating club until 1839 in Detroit. Remember, all this time throughout history, boats required manpower to run them. A crew was needed to either man the sails or row, and boating was a lot of hard work. However, with the invention of the internal combustion engine in the late 1800s, boating changed forever. The need for a boating crew vanished as did a lot of the work. By 1910, outboard motors came about with the ability to move from boat to boat. This technology finally made boating more affordable and available to the general public.

The boating industry began to ramp up. Fiberglass boats became available in the 1940s, making boats affordable, durable, and low maintenance. After WWII, the boating industry boomed. Then, the energy crisis in the 1970s and inflation in the 1980s saw a slowdown in recreational boating as well as the financial crisis in 2008.

What began as a king’s pleasure has evolved into an everyman’s past time. The 2016 Recreational Boating Participation Study showed that an estimated 142 million Americans went boating in 2016 — that’s 36 percent of households in the United States. The majority of them — 62 percent — have household incomes under $100,000. The average age people step on a boat is 12 years old.

Freedom Boat Club in Buford helps people spend more time in boats through a boat share program. From water skiing, swimming, fishing, racing, tubing, or sailing, friends and family get together and spend leisurely days beating the heat in a fun, casual way — all without the hassle of boat ownership or maintenance through our club. Our mission is to bring recreational boating to as many people as possible by making boating easy, simple, and fun. Contact us today! 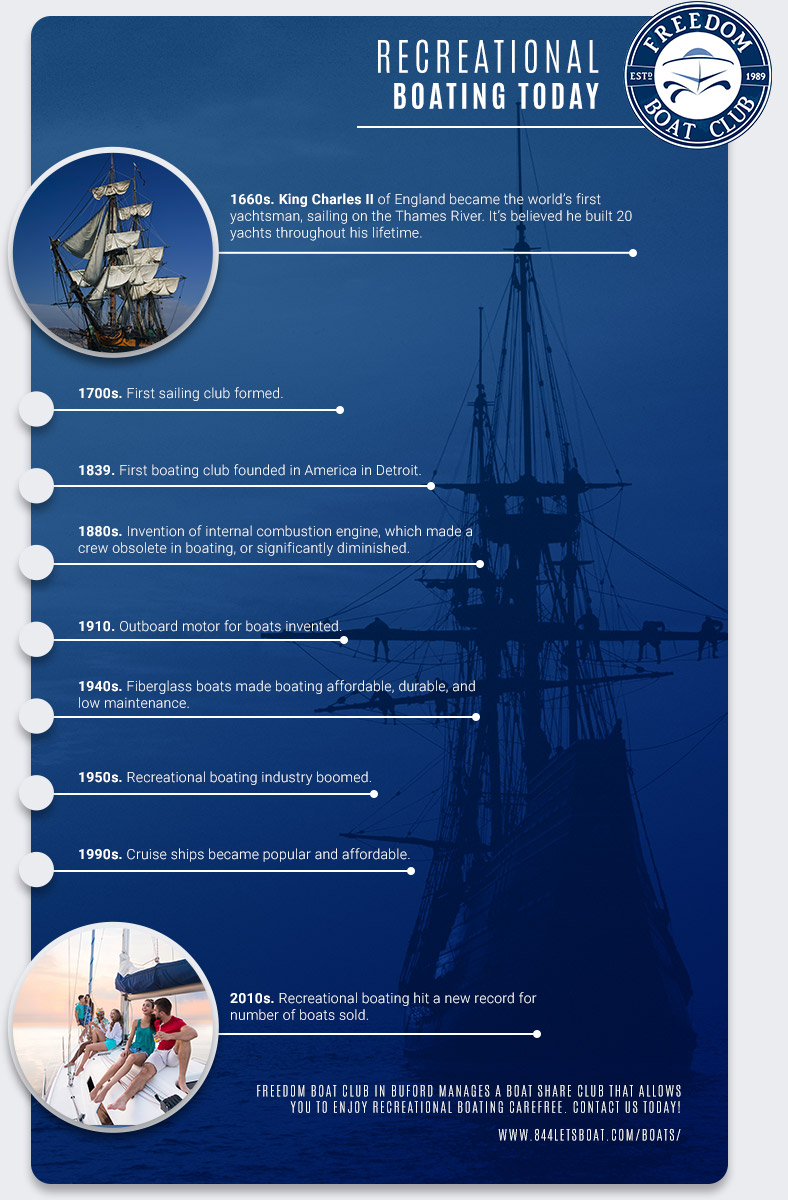